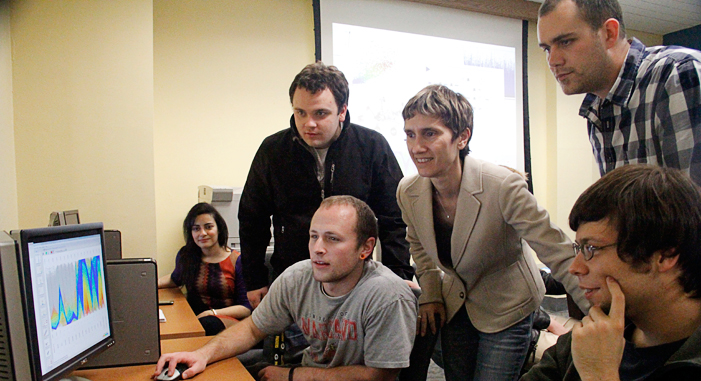 Engineers at Oregon State University and other leading institutions have made important advances that may dramatically change how machines get built, with a concept that could turn the approaches used by modern industry into a historic relic.

They will essentially throw out the old “design it, build a prototype and test it, then fix the mistakes and test it some more” method that’s been in place since the dawn of the Industrial Revolution. Approaches that worked for Robert Fulton or Henry Ford are now considered too expensive, wasteful, unpredictable and time-consuming.

Instead, virtually all of the design, testing, error identification and revisions will be done on a computer up to the point of commercial production. In theory, a new machine should work right the first time – and perform exactly as the computer said it would.

“If this works, and we believe it will, then it will revolutionize the way that machines get built,” said Irem Tumer, an associate professor in OSU’s School of Mechanical, Industrial and Manufacturing Engineering.

“The field holds great promise to design and test completed machines on a computer before they are ever built,” she said. “We’ll see what works, identify and solve problems, make any changes desired, and then go straight to commercial production.”

There’s some use of such approaches in the technology industry, which is a major reason it has boomed in recent decades. But this has never really been done before in mechanical engineering. The potential, experts say, is to radically change how almost any complex machine gets built, ranging from military vehicles to automobiles, aircraft, space vehicles, consumer products or machines used in industry.

The concept is called “model-based design and verification” and is getting initial impetus from a design challenge sponsored by the U.S. military, which wants a new amphibious vehicle in about one-fifth of the time it would ordinarily take to build one. Other customer requirements include lower cost and excellent performance.

The technology behind this process, experts say, is translating virtually every aspect of a mechanical system into data that can be mixed and matched in sophisticated computer systems: what a part will do, how it will perform, what materials it is made of, how much stress those materials can take before they fail, what will happen at the intersection where one component interacts with another, where failures might occur, and how those failures can be prevented.

OSU is joining with some of the nation’s leading universities and agencies on this problem, in work supported by the Defense Advanced Research Projects Agency, or DARPA. Collaborators include Vanderbilt University, the Massachusetts Institute of Technology, Georgia Tech University, Palo Alto Research Center, Carnegie Mellon University, and SRI International.

Advances already made at OSU, which have been published in professional journals, include work on failure propagation analysis, led by Tumer; a model repository, led by Robert Stone, a professor of mechanical engineering; and verification tools that will ensure the model should work, led by Christopher Hoyle, an assistant professor of mechanical engineering. Some of Tumer’s continued studies will look more closely at fault behavior, to determine what will happen if a part fails.

“We’ve done a lot of work like this in the past with individual parts, small groups of components,” Tumer said. “Now we’re taking that complexity to the level of a finished and completed machine, sometimes thousands of parts working together.

“That’s a much more difficult challenge,” she said. “But by the time we actually build it, we should know exactly what it will do and have already solved any problems. The testing will have already been done. There should not be any surprises.”

OSU has already received more than $1 million in support from DARPA on this META-II and C2M2L work, in part to support the “Adaptive Vehicle Make,” or AVM Program, which is trying to create a new amphibious vehicle. Engineers, even students, around the nation will be invited next year to take part in that initiative, using the tools being developed by OSU and its collaborators. This particular vehicle is called FANG, for Fast, Adaptive, Next-Generation Ground vehicle.

“You can understand why our armed forces are interested in this,” she said. “They want to speed production of needed military vehicles by five times over the conventional approach, which is a pretty aggressive goal. For them, it’s about saving money, saving time, and ultimately producing technology that helps to save lives.”

After that, Tumer said, the systems could be used anywhere. There’s little downside to producing cars, aircraft, or new industrial machines that work right the first time, cost less and get produced more quickly.